Photo caption: Group simulation wherein every participant highlighted a civil resistance strategy, thereafter sharing with others and in an acceptable sequence stand in order of execution thus from the first action to the last.

Energy and ideas that were brought to the fore on the first day of sessions were amazing and confirm the expectation that we are in for a jolly good ride that will definitely meet set objectives.

It is usual for programs to have a slow start on the first day and pick up momentum in subsequent sessions. Yet this set of participants defied that logic. The energy bursted from the first session anchored by Hardy Merriman discussing Introduction To Civil Resistance. Participants were so engaged that it ate into the break time and they were still willing to continue.

The next session was not any different led by Mary King and Philippe Duhamel focusing on Movement Emergence and Sustainability. In this session it wasn’t just the energy that kept the discussion alive but also the ideas. Discussions dwelled on organizing a successful civil resistance, understanding the principles and tools for analysis. It explored power dynamics, sources of power, the idea of win – win, and ultimatum. It explained the importance of other concepts that came out of participants’ simulation of organizing civil resistance and aligning ideas brought forth into a successful planned action (see photos). We discussed how participants should never lose sight of the importance of leadership in preparation, even down to the very details (such as a dress code for campaign participants, as in the Nashville lunch counter sit-ins in the 1960s).

The first day started and went very well… be assured that tomorrow will be even better. 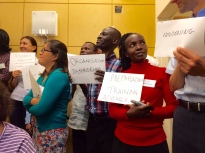