The impetus for an educational collaboration between the International Center

When discussions began between ICNC and Fletcher about this in late 2005, it quickly became clear that the teachable content for a distance-learning platform on nonviolent conflict first had to be developed and tested. So FSI was initially designed to “try out” one week of teachable knowledge and the pedagogy to provide it.

The content was developed to cover three perspectives on nonviolent conflict:

(1) The basic dynamics of civil resistance, which are not generally understood by practitioners or scholars in international affairs,

(2) The dimensions of movements and campaigns that are affected by the work of international professionals, such as external assistance to movements and media coverage of nonviolent conflict, and

(3) Applications of civil resistance in various kinds of urgent international situations.
We decided to hold the first Fletcher Summer Institute on the Advanced Study of Nonviolent Conflict (as it was christened), in June 2006. Although our primary intended type of participants would be early-career or mid-career international professionals (working for international organizations, NGOs, civil society organizations, and the like), we would also look for participants who also had personal experience in campaigns or movements while still doing international work, or who were working journalists.

The first FSI was a resounding success. Participants were very enthusiastic about the human experience during the week of sessions and in social interaction, and also very excited about this new domain of knowledge which they quickly recognized was not being offered through any other educational institution. It was so successful that we decided to put on hold the idea of a distance-learning curriculum, and hold FSI itself as a summer institute from then on.

Its evolution over the years has mainly been in the way it’s been presented and taught. We increasingly sought knowledgeable outside authorities on topics, to teach various sessions, as well as core ICNC staff and Fletcher School faculty. We also invited distinguished veterans of nonviolent movements to speak in evening sessions. And we chose to use FSI as the annual venue for the James Lawson Awards beginning in 2011, to recognize outstanding achievement in the practice or study of nonviolent conflict.

The core of FSI as a lived experience are the sessions in “Schmidheiny”, an amphitheatre-like classroom. This room intensifies people’s attentiveness, their ability to see and discuss questions with each other, and also easily to view video and power-point presentations. It’s like an incubator of high intellectual discourse and also great social esprit. 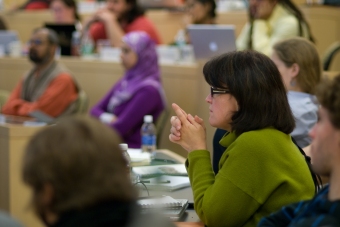 The totality of the week’s experience is what makes FSI unique: the rigorous exposure to one of the world’s most important phenomena, in determining the future of rights, democracy and peace; the camaraderie among likeminded people from all over the world who share this interest; and the stimulus it so often provides many people to become involved in the field of civil resistance. The most memorable phrase that I’ve heard more than a few times from participants at the closing dinner, when they’ve come up to thank me, is: “This has been a life-changing experience.”

Photo: The room where FSI has taken place since its founding in 2006, “Schmidheiny”, is “like an incubator of high intellectual discourse and also great social esprit.”